Piracy has been around since the beginning of computers and consoles, but it really became widespread in the 2000s, with Napster, torrents and peer-to-peer sites.

Many laws have been passed, both local and international. It is hard to pretend that someone doesn’t know that piracy is illegal. And yet, piracy figures are not decreasing - and they even increased during the restrictions due to the covid 19 pandemic. Mobile piracy has also become more and more widespread in the last years.

Why pirate when everyone knows it's illegal?

People who download content illegally are pretty vocal about it. So we were able to read hundreds of posts on the threads on Quora or on Reddit (which even has its own SubReddit dedicated to piracy). They allowed us a glimpse in the minds of people using illegal content, and the reasons are a bit more complex than a simple "I don't want to pay".

Let's get rid of the most obvious argument - price.

The following arguments are the most frequently used:

However, outside Europe and the United States, the simple argument about price comes up much more frequently. This young African explains it perfectly: 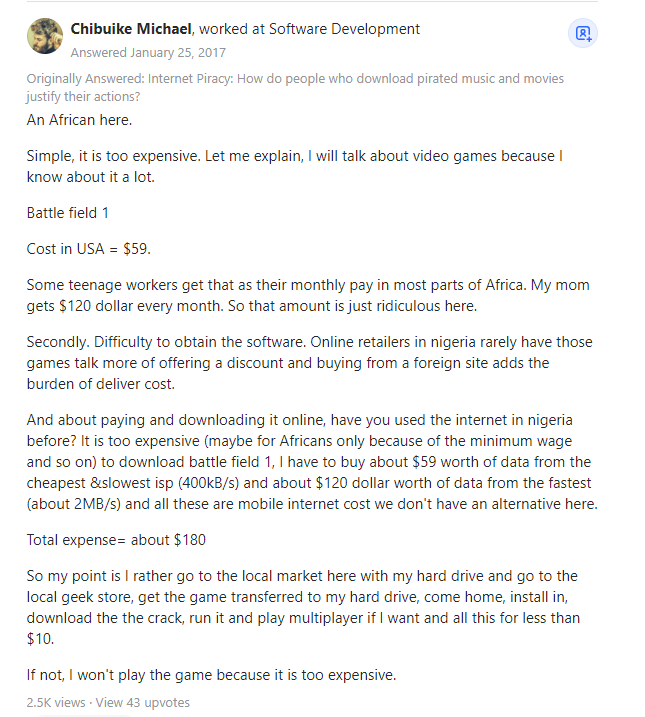 He basically explains that the total cost of a video game like Battlefield - buying the game and the bandwidth to download it - comes to 180 USD. His mother, in one week, earns 120. He can either play on the cracked version he finds at the market for $10 or not play at all.

In many developing countries, the argument literally is "it's too expensive" .

This argument comes up very frequently, both in Europe and in developing countries. For commercial, legal, and sometimes political reasons, it can be impossible to access a specific content.

Even the Netflix or Prime catalogs are different from one country to another - which many Internet users solve by using a VPN - thus remaining on the borders of illegality.

A variant of this argument is sometimes "the content is unavailable in my country ... for now" but nobody wants to wait 3 or 6 months more to access content already available elsewhere in the world and that everyone is talking about on the networks.

You live far away from movie theaters, and from well-stocked stores in big cities - but you have a good Internet connection? It can be much easier to click on a link and get the content you are looking for in 5 minutes rather than trying to physically buy your product…

Sometimes the product you are looking for is even available online, but pirate sites now have such a well-designed UI that some people find them faster and easier to navigate than official sites!

Some people don't even really question if they should pirate illegal content. They just do it, because everyone else does too. The content is available, just a click away. Their friends, their families, their colleagues do it with impunity. Why wouldn’t they? They see no reason not to.

5. Hacking Is an Act of Rebellion Against Capitalism

The arguments related to this mindset are the least frequent. A few self-made philosophers do try to link piracy to notions like "art should be free," "art should be available to as many people as possible, I'm helping to spread it," or are criticizing how intellectual property laws are designed and see piracy as a form of resistance, but they are a minority.

What emerges from all these testimonies is that no one seems interested in the fact that piracy is illegal. Opponents use moral and economic arguments, but one thing is clear - nobody writes, "I don't hack because I'm afraid of going to jail." The laws exist, but it is difficult to enforce them, and the international aspect of the networks makes the problem even more complex. Besides, a person who only downloads content does not consider themselves a "pirate" - this term is primarily reserved for those who make illegal content available. Downloading itself has a much more benign image.

To protect your product (movie, series, music, video game, ebook), the most reliable solution, at the moment, is to monitor the networks, and to remove illegal copies as soon as they appear. Do not hesitate to contact us for a free diagnosis, we have more than ten years of experience in this field!

Next week,  Join us for our overview of piracy in the music industry.